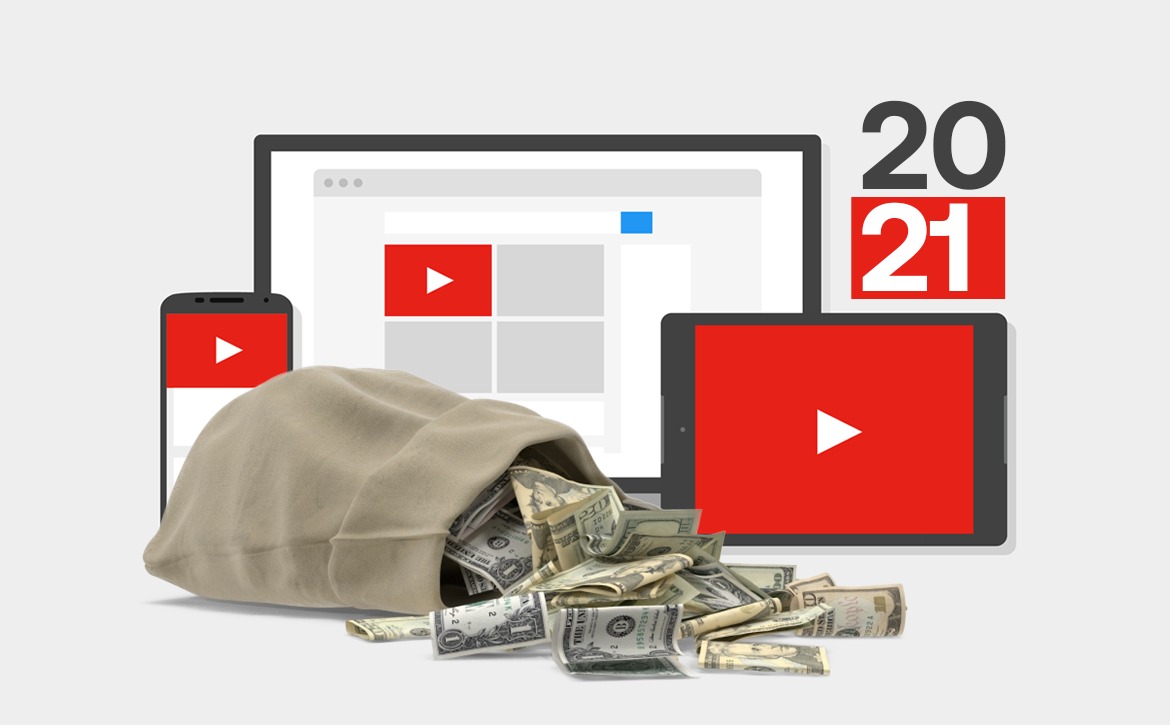 How much can we earn from YouTube Videos? This is the most eccentric question asked by all the content marketing novices. Whether it be a blog or a YouTube Channel, the only thing that keeps motivating the content developers to do more is money. Good content complying with Google Policies will surely fetch you good hard cash continually.

Before starting with “How Much Do you make on YouTube?” let me clear a few of your doubts first —

There is no exact number but on average one can make from $1- $25. It depends on lots of facets which we will discuss later (below) in detail.

The primary source of income from YouTube is through Google AdSense. Just link your YT account with AdSense and money will be transferred to your bank account. You can also go for sponsored or affiliated ads.

Do you get paid on YouTube for making videos?

No! YouTube doesn’t pay you for making and uploading the videos but will pay only if you monetize the videos with Google AdSense ads.

You will not earn for subscribers, of course not in the way you are thinking. But subscribers provide you with base viewers.

Generally, you can calculate your earnings with subs. (Approx). **Varies from niche to niche and country to country.

Earnings depend on the demographics of your viewers so it directly depends on your target audience.

Do I get paid for Likes?

No! You are not going to earn on likes or dislikes. Though it is a factor for video ranking in YouTube search results.

Does YT pay for video views?

No! YouTube doesn’t pay for video views but only pays for Advertisement actions while playing your video.

If you have US, UK, Canada, or Australia audiences at large then you can make anywhere from $500-$1000. But for viewers from India or any developing country, the earnings can reach up to $200.

Also, the niche factor should be considered.

How much Can I make 1 Million Views?

Before learning about the $$$, it is important to understand the basics of how YT pays.

YouTube pays when an Ad is displayed on your video. All you need to do is link your YT account with Google AdSense (monetization) and rest is handled by Google.

The YouTubers are only paid if the viewers do some sort of action with Ads which we will learn in detail below.

The Ad types for mobile app or website and a desktop version are different.

When a skippable video Ad is displayed and if the viewer skips the Ad in 5 secs then you are not paid as the viewer is not interested in the Ad.

Advertisers are only charged when the viewer watches 30 seconds of the Ad or watches to the Ad’s completion, whichever is shorter. This gives a win-win situation for both advertisers and publishers.

If the Ad is Non-Skippable then you will be paid for sure.

The earnings from display banner cards are different. Google pays only for clicks on the display Ads called Cost per Click (CPC).

It also pays for 1000 times the display Ads are viewed (Cost per Thousand Impression CPM) but the rate is low and is further balanced with CPC.

Now we will talk in detail about the decentralized subject of money-making from YT.

Google only pays if the viewer sees an Ad and do some action with the Ads. Also important is YT doesn’t display ads every time the video is viewed, especially in the case of mobile App.

Also, there is an Ad-blocking factor involved which further affects the earnings. We will learn about it later.

As the content creator, you get a 68% share of advertising revenue. This means for every $1 an advertiser pays, you get $0.68 and Google will get $0.32

As I said above, you will get paid if a viewer watches the complete ad or at least the first 30 seconds.

Now let us make some calculations:

Suppose a video got 3000 views and around 1000 times video ads were displayed. Out of which only 50 times the Ad was not skipped and watched until its completion.

Advertisers on average pay around $0.15 for video ads. So, your earnings will be;

Breaking into more details, the advertisers from USA, UK, Canada and other developed countries with high purchase per capita give high pay on video Ads ranging from $0.15-$0.75. Advertisers from developing countries like India, Indonesia, Brazil, etc provide a fair sum of $0.05-$0.1 per Ad view.

There is no specific number one can give as various keywords have a different value. And advertisers pay differently for different keywords.

When a display ad like banner/teaser/card is clicked by the viewer than then you get paid.

Now let us make some calculations;

Suppose a video gets 3000 views and various display ads are shown some 1500 times. The Ads are clicked by 50 viewers.

Advertisers on average pay around $0.2 for an Ad click. So, your earnings will be;

Here also the countries with high Purchase per Capita can give high CPC rates ranging from $0.2-$2

Combination of all Ad Types

This is just tentative earnings and the actual earning can vary greatly depending on the niche of your content, target audience, demographic regions, age group, and Ad type.

Factors which Impact your Earning

YouTube income is not specific and there are various factors that play a crucial role in cashing in profits from your videos.

Based on Google Trend data and research reports the following are the most profitable YouTube niches. Making videos related to this topic can get you a good audience and high CPC.

These are the few countries that give a very high CPC. So, making videos that target these countries will directly provide you with high earnings. Also, these countries have a good number of YouTube Red users further adding to the profits.

As you can see in the pic above, the estimated monetized playback (videos with Ads) are shown around 17k+ times for Indian audience and earnings made are just $25.40

In contrast to the UK, where the monetized playbacks are around 8k but earnings made are $28.55.

Also, for Canada where Monetised videos are played for 3.5k times but giving high Earnings up to $20.

So, this data could have surely cleared your doubt regarding the potentials of cashing in from wealthy countries with high PPC.

Earnings also depend on the length of the youtube videos. If the video is of a good length, generally above 10 minutes then you can earn more as Google will use mid-roll ads on long-length videos. Viewers will see more Ads on longer videos thus potentially increasing the earnings on the longer videos.

On shorter videos, YouTube will show ads only at the beginning of the videos.

It is of prime importance to creating videos that comply with Google Adsense Terms & Policies. If Google detects your video content & Title not adhering to AdSense Program Policy (TOS) then YouTube reserves the right, at its discretion, to not show ads on videos and watch pages—including ads from certain advertisers or certain formats.

If Ads get restricted on the videos then your earnings will fall as many big advertisers will refrain from showing their Ads on your watch. This doesn’t mean you should avoid creating such videos.

The greatest threat to YouTube income is AdBlockers. Around 300 million people all across the globe use some sort of Adblocking tools and also about 35% of total visitors to your YouTube videos use Ad-Block extensions.

This is a big loss of revenue for the publisher when you think about it on a large scale. Adblocking services block all sort of ads which otherwise could have been useful.

Ad filtering is not a big issue w.r.t App users because there is not an easy way to block Ads on YouTube App but can cause significant loss of revenue if most of your viewers are from the desktop.

Let us have some calculations;

Suppose a video got 5000 views out of which 3000 times Ads were supposed to be displayed but due to AdBlockers 40% Ads got filtered out. So, actual ads that showed up are 1200 times. Resulting in a 60% loss of revenue.

But the good news is more and more people are now using their smartphones to stream videos thus reducing the loss of revenue.

There are also a few other alternatives through which you can make good profits from your channel.

AdRev is the most popular Adsense alternative for YouTubers and is YouTube Certified program. AdRev helps to promote your channel across the network which gets 30+ Billion views annually.

You will get full creative control for creating custom thumbnails and support from optimizing monetization opportunities on your videos.

There are also other monetization alternatives for youtube like Fullscreenmedia, Freedom! & VidGenX but AdRev is found to be paying very high.

If your channel becomes influencing generating huge traffic, brands approach the creators to promote their product. The adverts can in form of sponsored video, product description or event promotion.

Generally, industries benched the sponsored videos to $1000-$10000 for every 100000 views. Nonetheless, it all depends on your content and target audience.

Other means like affiliate marketing with Amazon Affiliates can also be done. If someone buys the product using your links then you get some commission on the purchase.

This type of marketing is best suited if your channel focuses on product and electronics reviews.  To make good out of this program your videos should get a big audience.

How Much Money YouTubers make?

Though the exact number can’t be given but based on industry standards the following earnings are estimated.

The world’s most subscribed YouTube Channel which shows gameplays makes anywhere between $8 to $18 million per year.

Lilly Singh does everything from comedy sketches to music videos on her channel and makes around $5-$10 million per year.

Dubbed as the appalling prankster on YouTube. He makes some weirdest and horrifying pranks. He makes $7-$10 Million per view.

This Indian Youtuber makes comedy videos portraying himself as various characters of a family. He makes around $0.5-$1 million per year.

This Youtuber focuses on gaming and shows a lot of energy along with emotions in his videos. He makes close to around $5 Million per year.

I hope the post was helpful and cleared all your doubts related to the question of How Much Money Do I make from YouTube Channel. Do comment below for any of your suggestions or queries.

Have a nice day. Cheers!

OPEN YOUR DOORS TO THE WORLDfrom PLANNING to EXPANSION

Start your company in: